CORPUS CHRISTI, TX, USA – The Port Corpus Christi today announced the arrival of a Very Large Crude Carrier (VLCC), the largest oil tanker ever to call on a Gulf of Mexico Port. The ship docked safely at the Oxy Ingleside Energy Center (OIEC) export terminal, the first crude oil export facility in the U.S. to receive such a large vessel.

The arrival of the VLCC reflects the port’s commitment to becoming a major exporter of Permian Basin crude and securing the infrastructure necessary to do so. Occidental Petroleum Corporation is using the visit for operational planning in preparation to regularly load VLCCs in the future from its oil export terminal.

The VLCC, a ship named Anne owned by the Belgium-based Euronav, is a 1,093-foot-long vessel capable of holding over 2 million barrels of oil.  When fully laden a VLCC requires a draft of 66 feet.  Ship channel depth at Port Corpus Christi is at -47’ Mean Lower Low Water (MLLW), which would require a partial load of the VLCC, and an accompanying vessel to fill the remaining cargo once offshore. Current VLCC operations require multiple smaller vessels to transport product offshore for loading. Loading VLCCs at Occidental’s OIEC export terminal will provide significant cost and time savings.

As global demand for U.S. crude oil continues to increase, Port Corpus Christi remains as the frontrunner in supplying the export market.  When the U.S. oil export restrictions were lifted at the end of 2015 the first export cargo of U.S. crude oil in nearly forty years sailed aboard the tanker, THEO T, from the South Texas port.  Further benchmarking the U.S. crude export trend, a single vessel load record was set at Port Corpus Christi in April 2017, when 930,000 barrels of crude oil was loaded to the Suezmax class Cap Romuald.

“With a vision to be the Energy Port of the Americas, it is fitting for yet another milestone in U.S. crude exports to be set at our port.  As the first VLCC class vessel to call on any Gulf of Mexico port enters our Port Corpus Christi waterways, we are further assured of the importance in continuing infrastructure enhancements, and further deepening our ship channels,” said Charles W. Zahn, Chairman of the Port Corpus Christi Commission.

“We believe the Oxy Ingleside Energy Center is the premier crude oil export terminal in the United States,” said Vicki Hollub, President and Chief Executive Officer, Occidental Petroleum. “Permian Basin crude is being exported Asia, Europe and elsewhere around the world, and Occidental’s export facility is well positioned to serve the Permian, which is the largest and fastest-growing basin in the U.S. The arrival of the VLCC at our terminal continues to build on our position as the Permian’s largest oil producer, enabling us to load the largest ships with our crude and the crude of other producers.”

Port Corpus Christi is in the midst of a 10-year, $1 billion Capital Investment program.  A major component of the program includes the Corpus Christi Ship Channel deepening and widening project.  This project will enhance the existing -47 foot (MLLW) Corpus Christi Ship Channel depth to -54 foot (MLLW), expanding width to 530 feet, and installing barge shelves along the channel.  Additionally, construction of the longest cable-stayed bridge in the Western Hemisphere is underway to replace the aging Corpus Christi Harbor Bridge.  Scheduled for completion in 2020, the bridge will provide increased air draft clearance to 205 feet.

Infrastructure improvements surrounding Port Corpus Christi are priming the port for the modern fleet of larger ocean-going vessels which convey cleaner, and much improved operating efficiencies for marine transportation markets. 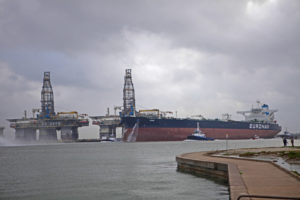 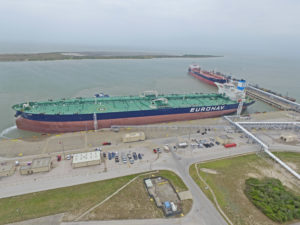