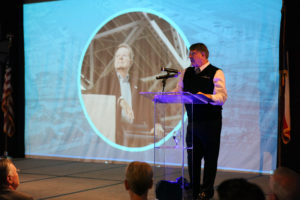 “As part of the Port of Corpus Christi Authority Commission’s vision for the future, we pause to thank John LaRue for his outstanding leadership and steady hand over the last two decades.” said Charles Zahn, Chairman, Port Corpus Christi Commission. “We also welcome Sean Strawbridge in his new role as CEO and, with John LaRue’s example, we have full confidence Sean will take the Port to new highs and new frontiers.” 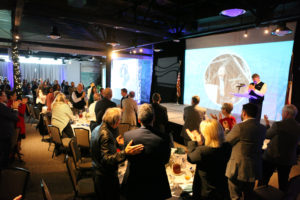 Event attendees stand in honor of John LaRue at Thursday’s annual State of the Port.

Mr. LaRue has led the Port of Corpus Christi since 1994, arriving at the Port from Philadelphia Regional Port Authority where he also served as Executive Director.  Over his 23 year tenure, Mr. LaRue marshalled the Port of Corpus Christi from a regional Port Authority to what is now the fourth largest port in the United States in tonnage.  He has been instrumental in setting Texas and U.S. port policy and is an internationally recognized expert on port strategy.  He has served on numerous advisory panels and boards and continues to advocate for funding of critical national infrastructure. 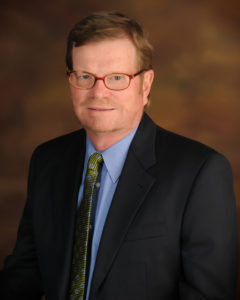 “It has been a wonderful experience to lead the Port of Corpus Christi over the last 23 years.” said John LaRue, Port Corpus Christi Executive Director.  “We’ve seen fantastic growth over the years and I couldn’t be more pleased with the condition the Port is in today. I welcome the transition and look forward to supporting Sean in his new role as CEO.”

In his advisory role, LaRue will help Strawbridge settle into the role of CEO of the Nation’s largest export port for U.S. produced crude oil. Strawbridge arrived in Corpus Christi in 2015 after a national search for a successor to LaRue.  Previously, Mr. Strawbridge worked at Oxbow Energy, Ports America Group, and the Port of Long Beach where he was the Managing Director of Port Operations and Trade Development.

“I am thankful to the Board for their confidence in me and truly grateful for the opportunity to work alongside John as he helps guide me in this new responsibility.” Sean Strawbridge, Deputy Executive Director and COO, said.  “I am confident the path we are on is the right one and I thank John for his continued support as we carry on his legacy.” 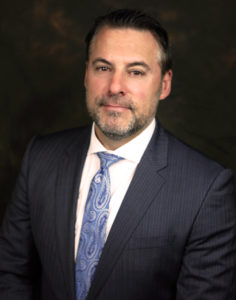 As the leading US Crude Oil export port and a major economic engine of Texas and the nation, Port Corpus Christi is the 4th largest port in the United States in total tonnage.  Strategically located on the western Gulf of Mexico with a 36 mile, 47 foot (MLLW) deep channel, Port Corpus Christi is a major gateway to international and domestic maritime commerce.  The Port has excellent railroad and highway network connectivity via three North American Class-1 railroads and two major interstate highways. With an outstanding staff overseen by its seven member commission, Port Corpus Christi is “Moving America’s Energy.” http://www.portcorpuschristi.com/