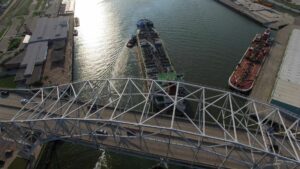 “This contract is vital for us to continue the deepening and widening of the existing Corpus Christi Ship Channel. The work will improve energy product transportation throughout at the Port of Corpus Christi by allowing larger vessels more efficient access, which will boost the economic competitive advantage and energy security of the United States for decades to come,” said Colonel Timothy Vail, USACE Galveston District Commander.

The Port of Corpus Christi has advocated for the advancement of this landmark project for the past 30 years. In February, the Administration released its proposed fiscal year 2021 President’s Budget, which included over $100 million in the USACE Civil Works Division for Coastal Navigation Construction for the project. To date the Corpus Christi Ship Channel Improvement Project has already received nearly $150 million in federal appropriations, and the Port of Corpus Christi has accelerated an additional $150 million of its own cost share portion capital to progress the project.

“We are extremely appreciative of the Army Corps of Engineers for acknowledging the strategic national importance of executing the Corpus Christi Ship Channel Improvement Project,” said Sean Strawbridge, Port of Corpus Christi Chief Executive Officer. “As the largest export gateway for U.S. produced energy destined for global demand markets, a deeper and wider ship channel will solidify the competitiveness of American energy on the world stage.”

The Texas-based Callan Marine, Ltd., has worked extensively on channel-deepening projects, beach re-nourishment projects and marsh creation projects. The newest and largest dredger in the Callen Marine fleet, the General MacArthur, is expected to be mobilized from Galveston to Corpus Christi in the next few weeks.

“Our mission is to provide top tier dredging services through quality performance, competitive pricing, safe work, and professional relationships,” states Maxie McGuire, Callan Marine, Ltd., President. “This award is particularly special to us because it demonstrates faith in the Callan brand and our years of experience. We are honored to partner with the US Army Corps of Engineer’s Galveston District and the Port of Corpus Christi on this project.”

Estimated completion for this phase of the Corpus Christi Ship Channel Improvement Project is early 2022, with improvements to Ingleside by fourth quarter of 2021.

As a leader in U.S. Crude Oil export ports and a major economic engine of Texas and the nation, Port Corpus Christi is the 3rd largest port in the United States in total revenue tonnage. Strategically located on the western Gulf of Mexico with a 36-mile, soon to be 54-foot (MLLW) deep channel, Port Corpus Christi is a major gateway to international and domestic maritime commerce. The Port has excellent railroad and highway network connectivity via three North American Class-1 railroads and two major interstate highways. With an outstanding staff overseen by its seven-member commission, Port Corpus Christi is “Moving America’s Energy.” https://www.portofcc.com/