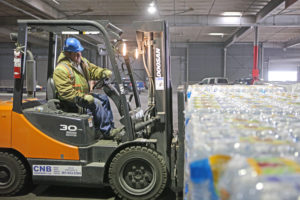 “Our port is deeply rooted with the citizens of our region,” said Charles W. Zahn, Jr. Port of Corpus Christi Commission Chair.  “We are ready and willing to provide support during this and other times of need.”

Numerous pallets of bottled water were acquired by the City of Corpus Christi through an anonymous donation in December of 2016 following an alert issued citywide requiring the discontinuation of tap water use for any purpose for several days.  In support of ongoing emergency management efforts the port provided for the City of Corpus Christi when a solution for storage and distribution became necessary.  The Port of Corpus Christi Authority stepped in providing operational support, warehouse space, and man-power.

The City of Corpus Christi water crisis was soon resolved, and pallets have remained stored at the port as a backup resource should another water event occur such as this one in Bee County.

Join the Energy Port of the Americas on Social Media