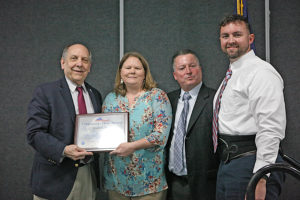 Hale’s actions helped protect her community during Harvey’s landfall and helped them rebound quickly after the storm passed. She activated the community’s emergency operations plan well in advance of the storm, remained in continuous communication with all Port partners and employees, and closed the nation’s 4th largest port, actions that allowed for the timely evacuation of nearly every vessel and all non-essential employees. After the storm, Hale ensured the safety and security of all essential port personal and facilities by assisting with search and rescue, damage assessments and restoration activities. Hale’s actions allowed the port to reopen in a record six days, with no fatalities.

Hale tenaciously worked to protect her community while her own family was displaced when Harvey destroyed their home.

“Hurricane Harvey left an impact in its wake that will forever change our Coastal Bend Region,” said Charles Zahn, Port of Corpus Christi Commission Chair.  “The widespread catastrophic damage affected lives throughout our community including many of those who keep our Port moving.  Danielle Hale and her family lost their home to Hurricane Harvey all while her role as the Port of Corpus Christi Manager of Emergency Management ensured our community and Port were ready to weather the storm.  We are proud of Danielle, her leadership, and her designation as a NOAA StormReady Community Hero.”

“Danielle’s actions exemplify the hard work and dedication of all emergency managers. I am honored to present her with this award for her heroic actions that directly saved lives when Hurricane Harvey struck her community,” Louis W. Uccellini, Ph.D., Director of NOAA’s National Weather Service said. “The vital partnerships between the National Weather Service and emergency managers is a critical part of building a Weather-Ready Nation.”

Hale is the seventh recipient of the StormReady Community Hero award since its inception in 2002, and the first award recipient for actions taken to save lives during a catastrophic hurricane landfall.

As the leading U.S. crude oil export port and a major economic engine of Texas and the nation, Port Corpus Christi is the 4th largest port in the United States in total tonnage.  Strategically located on the western Gulf of Mexico with a 36-mile, 47-foot (MLLW) deep channel and a 54-foot (MLLW) deepening project underway, Port Corpus Christi is a major gateway to international and domestic maritime commerce.  The Port has excellent railroad and highway network connectivity via three North American Class-1 railroads and two major interstate highways. With an outstanding staff overseen by its seven-member commission, Port Corpus Christi is “Moving America’s Energy.” http://www.portcorpuschristi.com/ 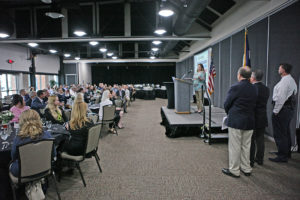 With a large gathering of Port Corpus Christi employees, members of the Coastal Bend community, and the National Weather Service in attendance, Danielle Hale speaks after accepting the NOAA StormReady Community Hero award. 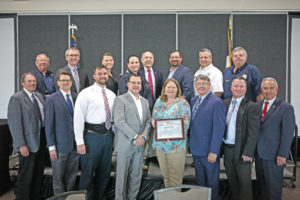 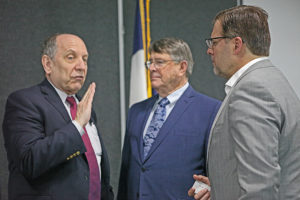