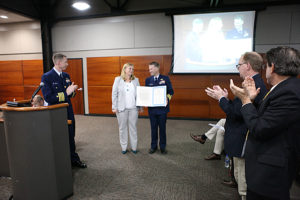 Corpus Christi, TX, USA – Director of Environmental Planning & Compliance Sarah Garza was honored with a Public Service Commendation for her notable services that assisted greatly in furthering the aims and functions of the Coast Guard during Hurricane Harvey.  The commendation, signed by USCG Rear Admiral Paul F. Thomas, Commander of the Eight Coast Guard District, was presented at the Port Corpus Christi Commission meeting on Tuesday, March 20 by USCG Captain Tony Hann, Captain of the Port of Corpus Christi, along with Deputy Captain Jason E. Smith.

“We have the best team at the Port.  I am always amazed and proud of their professionalism and commitment to the Port’s vision,” said Comission Chairman Charlie Zahn. “The Port Commission is honored to have witnessed this honorable commendation for Sarah for her outstanding performance and job well done during challenging times, and would like to thank the U.S. Coast Guard for recognizing her contribution to the recovery efforts after the storm.”

“Sarah Garza exemplifies the professionalism and teamwork the fine women and men of the Port of Corpus Christi demonstrated during Hurricane Harvey.” Port of Corpus Christi CEO Sean Strawbridge said. “This prestigious recognition of her leadership and selfless acts of service to the overall hurricane recovery efforts are well deserved and we are very proud of her.” 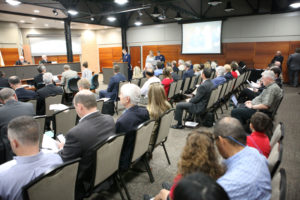 Port of Corpus Christi Director of Environmental Planning and Compliance, Sarah Garza, was awarded with a Public Service Commendation by the
United Stated Coast Guard at the March 2018 meeting of the Port Commission.

The honorable commendation recognizes Garza’s performance as a member of the Sector Corpus Christi Incident Command Post from August 27 to September 7, 2017, in response to the devastation caused by Hurricane Harvey. The unprecedented Category 4 storm, with winds reaching up to 135 miles per hour and storm surge exceeding 10 feet, destroyed or severely damaged approximately 80% of multiple coastal communities.  As a member of the Marine Transportation Recovery Unit, Garza developed a data base to track the operational status of waterfront facilities and immediately identify those needing assistance.  The database was used to keep regional and national leadership appraised of impacts to the maritime transportation system, including critical fuel refineries, and allowed the Port Coordination Team to prioritize inbound and outbound vessels to safely restore traffic flow. Furthermore, she assisted the Environmental Resource Unit Team on impacts resulting from the storm, which enabled the Operations and Planning Sections to develop response plans to mitigate the treats.

In his recognition, Vice Adm. Thomas wrote: “Ms. Garza’s dedication, expertise and unwavering support for public service are most heartily commended and are in keeping with the highest traditions of the United States Coast Guard.”

As the leading U.S. crude oil export port and a major economic engine of Texas and the nation, Port Corpus Christi is the 4th largest port in the United States in total tonnage.  Strategically located on the western Gulf of Mexico with a 36-mile, 47-foot (MLLW) deep channel and a 54-foot (MLLW) deepening project underway, Port Corpus Christi is a major gateway to international and domestic maritime commerce.  The Port has excellent railroad and highway network connectivity via three North American Class-1 railroads and two major interstate highways. With an outstanding staff overseen by its seven-member commission, Port Corpus Christi is “Moving America’s Energy.” http://www.portcorpuschristi.com/