CORPUS CHRISTI, TX, USA – The Port of Corpus Christi today announced the approval of a long-term lease agreement with Maverick Terminals Corpus LLC, a subsidiary of Howard Energy Partners.  The 30-year lease agreement was approved unanimously by port commissioners for approximately 41 acres of land on the north side of the Corpus Christi Ship Channel in the Inner Harbor. 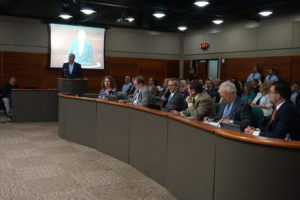 With the expansive growth in both Eagle Ford and Permian Basin productions and the growing global energy demand in general and in particular in Mexico, Corpus Christi is fast emerging as the Energy Port of the Americas. As the largest refining center in close proximity to Mexico Corpus Christi continues to see large investments in supporting the transportation of US energy to Mexican consumers. Howard Energy Partners, a full-service midstream company based in San Antonio, has emerged as a strong player in the energy space and continues to demonstrate leadership in developing projects on both sides of the border.

Howard Energy Partners plans to design, construct, and operate a rail terminal, and a petroleum and petroleum products storage facility on the leased property.  Further, Howard Energy Partners intends for this facility to connect with its proposed Dos Aguilas pipeline to Monterrey, Mexico.  As part of the lease agreement terms the Port of Corpus Christi Authority will design and construct a new oil dock, Oil Dock 20.

The Oil Dock 20 facility will initially serve Mexico’s transportation fuel demands by rail with an estimated target of at least two to three unit trains per week. Once the Dos Aguilas pipeline is permitted, constructed, and in-service, significantly more volume is anticipated.  Further, the Oil Dock 20 is targeting crude exports to international markets and will have Suez-max capability.

“Port Corpus Christi has secured its position as the number one crude oil export port in the United States.  This major investment from Howard Energy Partners represents a shining example of why the Port of Corpus Christi is the Energy Port of the Americas,” said Charles W. Zahn, Chairman of the Port Corpus Christi Commission.

“This lease marks a strategic and significant expansion of our terminal network, not only for refined products but for crude oil.  We are excited about the opportunities for further development, and look forward to continuing to expand our relationship with the Port of Corpus Christi,” said Brad Bynum, Howard Energy Partners Co-Founder and President.