CORPUS CHRISTI, TX, USA – NuStar Energy reached a significant milestone at the Port of Corpus Christi last week when it loaded 930,000 barrels of crude oil onto a single vessel. The Suezmax class Cap Romuald is a vessel designed to traverse the Suez Canal in the Middle East.  Such larger vessels are calling the Port of Corpus Christi with more frequency due to the increased production of Eagle Ford and Permian Basin produced crude and the lifting of the export ban on U.S. produced crude oil in December 2015. 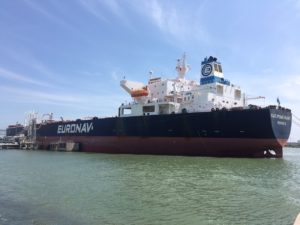 The Cap Romuald was loaded with 930,000 barrels of crude oil via NuStar Energy at Port Corpus Christi.

With long-term tenants such as NuStar Energy, the Port of Corpus Christi has positioned itself to become the largest energy port in the Americas, a vision that is advancing with higher volumes of crude and natural gas liquids (NGLs) exported from the Corpus Christi Coastal Bend to all regions of the world.  By comparison, the nearly 1 million barrels of crude oil loaded on the Cap Romuald is more than three times the Port of Corpus Christi’s 2010 outbound crude volumes for the entire year.

With several proposed crude oil and natural gas pipeline projects announced over recent weeks from the Permian Basin to Corpus Christi, it is expected that additional crude and NGLs volumes will move to the Port of Corpus Christi Authority and ultimately find their way to international markets.  The Energy Information Administration recently forecasted that the United States is on track to become a net exporter of its energy production by 2026.  The last time the United States was a net energy exporter was 1953.

“NuStar Energy’s historic crude oil load out of nearly one million barrels to a single vessel is example of the energy renaissance we are experiencing in the United States and particularly in South Texas,” said Charles W. Zahn, Jr., Port of Corpus Christi Commission Chairman.  “We are excited to witness the momentum first hand and share it with energy industry partners such as NuStar.”

The Port of Corpus Christi continues to enhance infrastructure under its 10 year $1 billion Capital Investment Program.  Along with new deep-draft liquid bulk docks, Port of Corpus Christi officials are about to commence the Corpus Christi Ship Channel deepening and widening project.  This project will deepen the existing -47 foot (MLLW) channel to -54 foot (MLLW), will expand the Channel width to 530 feet allowing for two-way large vessel traffic, and will install barge shelves along the Channel in support of the over 2,000 barge movements the Port experiences each year. In addition to the Channel Improvement Project is the Corpus Christi Harbor Bridge replacement project scheduled for completion in 2020.  This new cable-stayed bridge will be the longest in the Western Hemisphere, and increase vessel air draft clearance to 205 feet.

These infrastructure improvements at the Port of Corpus Christi make way for the more modern, larger ocean-going vessels which convey cleaner, much improved operating efficiencies to the marine transportation markets.