CORPUS CHRISTI, TX, USA – In a major asset purchase which closed Wednesday, December 21, NuStar Energy L.P. (“NuStar”) added significant throughput capacity at its Port of Corpus Christi facilities, now capable of handling over 200 million barrels annually.  Included in the $93 million transaction are marine terminal dock assets, additional tank storage with shell capacity of 900,000 barrels of crude and 250,000 barrels of refined products, and other assets located in the North Beach area of the Port of Corpus Christi.

Named the NuStar Energy North Beach Terminal, the facility will now connect to the Port of Corpus Christi’s newest Oil Dock 15 with a design draft of 52 feet, allowing for Suez-Max sized vessels once the main channel has been deepened. 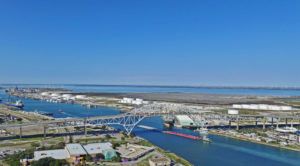 “NuStar Energy continues to be a stalwart investor in facilities at Port Corpus Christi.  We have garnered a robust relationship with the folks at NuStar, and NuStar Energy is a great partner for our region.  Not only are they investing capital in infrastructure at our port, but they are great partners of the port in giving back to our community,” said Charles W. Zahn, Jr., Port Corpus Christi Commission Chair.

“This acquisition further strengthens NuStar’s position as one of the top logistics players in the Corpus Christi region, which has long been a strategic hub for us,” said NuStar President and CEO Brad Barron. “We now have access to a new pipeline and new customers, and greater connectivity to domestic and international crude oil and refined products markets, and an existing customer has expressed interest in increasing volumes and the length of our contract with them thanks to the increased dock space and capacity we now have.

“We are also fortunate to bring aboard a strong workforce at the terminal, and we are working with them to quickly integrate the terminal into our system so that we can take advantage of the many operational synergies between the terminal and our existing operations,” Barron added.