Corpus Christi, TX, USA – The Port of Corpus Christi is pleased this week to recognize the two-year anniversary of Congress lifting the ban on exports of crude oil, and proud to have played a role in the expansion of the United States as a global leader in energy trade. Legislation to lift the export ban passed Congress and was signed into law by President Barack Obama on December 18, 2015. 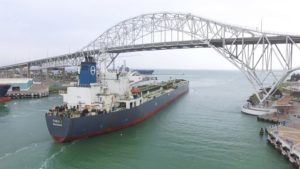 From handling the first shipment of U.S. crude oil abroad on Dec. 31, 2015 to now facilitating 61 percent of America’s 478 million barrels of crude oil exports, Port Corpus Christi is leading the way as a net oil exporter.

“The rise of crude oil exports has been a win for the U.S. economy and its trading partners,” said John LaRue, Port Corpus Christi Executive Director. “The last two years have shown that opening up energy trade and leveraging our resource wealth helps balance our trade deficit, create jobs and drive U.S. manufacturing. With oil production on the rise, we need to continue to support the sectors that are benefitting us, including the critical infrastructure that make exports possible.”

Exporting American crude supports U.S. allies abroad by providing an alternative source for reliable and affordable fuel, strengthens our trading relationships and helps balance the budget. According to Energy Analysts International, the Port of Corpus Christi is expected to export $5.5 billion of crude oil to U.S. trading partners in 2017 contributing to offset the United States trade deficit.

For more information on Port Corpus Christi and the anniversary of the crude oil export ban, please contact Patricia Cardenas at patricia@pocca.com.

As the leading US Crude Oil export port and a major economic engine of Texas and the nation, Port Corpus Christi is the 4th largest port in the United States in total tonnage. Strategically located on the western Gulf of Mexico with a 36 mile, 47 foot (MLLW) deep channel, Port Corpus Christi is a major gateway to international and domestic maritime commerce. The Port has excellent railroad and highway network connectivity via three North American Class-1 railroads and two major interstate highways. With an outstanding staff overseen by its seven member commission, Port Corpus Christi is “Moving America’s Energy.” http://www.portcorpuschristi.com/