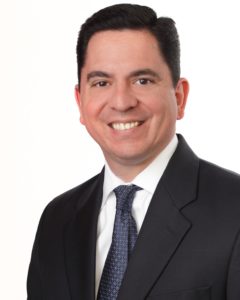 Corpus Christi, TX, USA – The Port of Corpus Christi has appointed Omar Garcia as its Chief External Affairs Officer. Garcia most recently served as the CEO of the South Texas Energy & Economic Roundtable (STEER), an oil and gas association tasked with facilitating further investment in the Eagle Ford region while promoting the benefits to the region.

A native of Kingsville, Texas, Garcia is highly skilled in developing public and economic policy, having been appointed in 2010 to the Texas Economic Development Corporation by then Governor Rick Perry, and is an experienced authority in the oil and gas industry. Including his time at the Texas Governor’s Office, Garcia has more than a decade of regional economic development experience.

Garcia will lead the Port’s External Affairs functions and is responsible for oversight and guidance of the governmental affairs, public affairs, communications and community relations disciplines.

“It’s an exciting time at the Port and I look forward to being part of its growth,” Omar Garcia said. “The Port plays a vital role, not only in this community, but in the global energy landscape, and I am thrilled to help communicate all of the amazing things that are coming into view.”

“Omar is a great addition to the Port of Corpus Christi senior leadership team and he will represent well our interests and those of our stakeholders.” said Sean Strawbridge, Chief Executive Officer of the Port of Corpus Christi. “His long-standing relationships with our elected officials, local, state and federal agencies, and our customers will serve us well as we continue to develop the requisite infrastructure designed to facilitate more exports of American energy abroad and drive economic growth for the Coastal Bend, the State of Texas, and the Nation.”

As the leading U.S. Crude Oil export port and a major economic engine of Texas and the nation, Port Corpus Christi is the 4th largest port in the United States in total tonnage.  Strategically located on the western Gulf of Mexico with a 36-mile, 47 foot (MLLW) deep channel, Port Corpus Christi is a major gateway to international and domestic maritime commerce.  The Port has excellent railroad and highway network connectivity via three North American Class-1 railroads and two major interstate highways. With an outstanding staff overseen by its seven-member commission, Port Corpus Christi is “Moving America’s Energy.” http://www.portcorpuschristi.com/