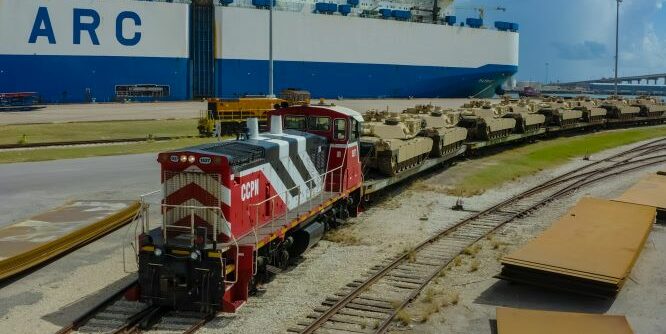 Corpus Christi, TX, USA – The Port of Corpus Christi continued its support this week for American military readiness, working directly with the U.S. Army in the movement of over 2,500 pieces of cargo. The operation supported the 2nd Armored Brigade Combat Team, 1st Cavalry Division, which has returned stateside following a nine-month deployment in Germany.

A federally designated strategic military port, the Port of Corpus Christi moves thousands of pieces of DoD cargo annually in support of U.S. military operations and those of the Nation’s Allies around the world. This week’s operations included six vessels, nearly 200 commercial trucks and more than 600 railcars for unit transport to Fort Hood.

The movement of military cargo and equipment through the Port of Corpus Christi is a coordinated effort with the U.S. Transportation Command, U.S. Army 842nd Transportation Battalion, U.S. Coast Guard, Texas Department of Public Safety, U.S. Army Corps of Engineers and the International Longshoremen’s Association.

“Working to ensure our military is in a perpetual state of readiness is a mission the Port of Corpus Christi constantly strives to fulfill,” said Charles W. Zahn, Port of Corpus Christi Commission Chairman. “We always aim to see to it that our military is able to efficiently and effectively transport what they need to be prepared for any threats that may arise that challenge the stability of our nation or the rest of the world.”

As a leader in U.S. Crude Oil export ports and a major economic engine of Texas and the nation, Port Corpus Christi is the 3rd largest port in the United States in total revenue tonnage. Strategically located on the western Gulf of Mexico with a 36-mile, soon to be 54-foot (MLLW) deep channel, Port Corpus Christi is a major gateway to international and domestic maritime commerce. The Port has excellent railroad and highway network connectivity via three North American Class-1 railroads and two major interstate highways. With an outstanding staff overseen by its seven-member commission, Port Corpus Christi is “Moving America’s Energy.” https://www.portofcc.com/