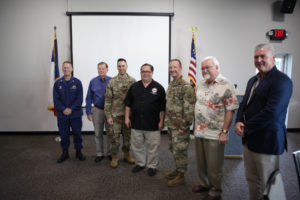 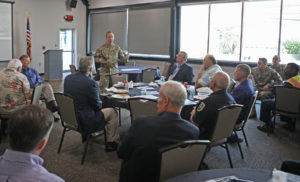 Major General Ryan lauded the responsive readiness of Port Corpus Christi in accommodating such a large operation for timely deployment, and especially in the wake of Hurricane Harvey and its devastating blow to the region.  The Major General aims for the SDDC to operate with increasing efficiency in support of deployment readiness across the U.S. military Total Force and noted Port Corpus Christi’s success as an integral and efficient partner.

“As a designated U.S. Strategic Military Port, we are honored to answer the call to uphold our nation’s military objectives.  We stand ready in support of our military, and to facilitate the swift movement of equipment for our troops,” said Charles W. Zahn, Jr. Port Corpus Christi Commission Chair. 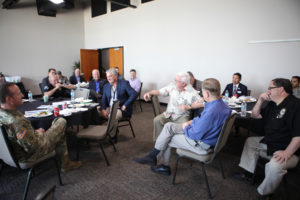 “Port Corpus Christi is a great partner in moving military equipment around the world,” said Congressman Blake Farenthold. “It’s amazing how many helicopters, tanks, and other pieces of equipment can be quickly loaded and transported by sea.  It was great to see what the Army, under the leadership of Major General Kurt Ryan, and the port are up to in helping defend America.”

The Military Surface Deployment and Distribution Command is a unique Army command that delivers world-class, origin-to-destination distribution solutions. Whenever and wherever Soldiers, Sailors, Airmen, Marines and Coast Guardsmen are deployed, SDDC is involved in planning and executing the surface delivery of their equipment and supplies.  SDDC is the Army Service Component Command of the U.S. Transportation Command and is a major subordinate command to Army Materiel Command. This relationship links USTRANSCOM’s Joint Deployment and Distribution Enterprise and AMC’s Materiel Enterprise. The command also partners with the commercial transportation industry as the coordinating link between DOD surface transportation requirement and the capability industry provides.

As a major economic engine of the South Texas Coastal Bend, Port Corpus Christi is the 4th largest port in the United States in total tonnage. Strategically located on the western Gulf of Mexico with a 36 mile, 47 foot (MLLW) deep channel, Port Corpus Christi is a major gateway to international and domestic marine commerce. The Port has excellent rail and highway network connectivity via three North American Class-1 railroads and two major interstates. With an outstanding staff overseen by its seven member commission, Port Corpus Christi is clearly the Energy Port of the Americas.  http://www.portcorpuschristi.com/