The proposed EPIC pipeline would reach from the Permian Basin to Port Corpus Christi, and be the longest Texas pipeline constructed in nearly a decade.

EPIC stands for Eagle Ford, Permian, Ingleside, and Corpus (Christi).  The 730-mile pipeline could transport over 440,000 barrels of crude oil and condensate per day from the Permian Basin to the Corpus Christi region upon coming online in the first quarter of 2019.  With connections to the Eagle Ford Shale transporting more than 150,000 barrels per day (bpd) nearly 600,000 bpd of crude and condensate will flow through the pipeline.

As U.S. production ramps up, Port Corpus Christi’s role continues to strengthen especially as more product is expected to trade on the water borne market.

In a San Antonio Express-News interview Port Corpus Christi Chief Commercial Officer, Jarl Pedersen, recently said, “It’s great for us, for the port because we strongly believe that. . .we have to find more flexibility for market access,” regarding oil from the Permian Basin. 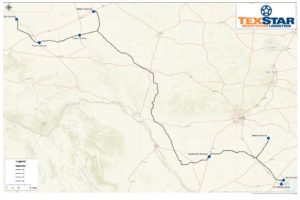 Read more from the San Antonio Express-News: “Proposed ‘EPIC’ 730-mile pipeline would be largest for Texas since at least ’08”

fuelfix: 730-mile Epic Permian to Corpus pipeline in the works