Highly in demand, Texas light crude oil, is sending a surge of opportunity for United States producers around the globe.

A recent New York Times article states; “Suddenly buyers from all over the world are purchasing the new American supplies, from South Korea to India – even oil-rich Venezuela, which uses the light sweet crude that comes out of American shale to blend with its gooey heavy crude. The light crude is highly prized even while global oil markets are saturated.”

United States oil provides a more stable option for the international market, and is moving the nation towards energy independence.

Oil exports are bringing in a new wave of jobs in the United States despite lower crude prices. Oil field production is benefiting from new technology along with lower costs in the field. 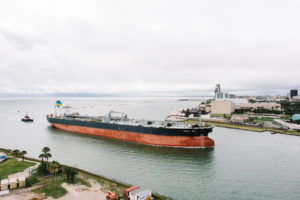 While the Port of Corpus Christi continues to see record setting numbers in crude exports, the port is in the midst of a $1 billion capital investment program. A key component includes the deepening and widening of the Corpus Christi Ship Channel which will create even greater efficiencies for shippers of America’s energy.

Read more about the booming increase in exports, expansions surrounding the Port of Corpus Christi, and the new jobs being created from the New York Times – “Oil Exports, Illegal for Decades, Now Fuel a Texas Port Boom.”