Congressman Farenthold Seeks to Deepen Commitment to Ports with President-Elect

Congressman Blake Farenthold continues to emphasize the importance of improving transportation infrastructure in the United States by way of new road construction, and the deepening and widening of our nation’s ports.  As the United States prepares for a new executive administration, Mr. Farenthold has sent a letter to President-Elect, Donald Trump.  With emphasis on infrastructure improvements, and specifically the Corpus Christi Ship Channel Improvement Project, the Congressman’s letter expresses the vitality of our nation’s seaports.

The Corpus Christi Ship Channel Improvement Project is fully authorized and permitted.  The project will increase the existing channel depth to 52 feet, widen to 530 feet, add barge shelves, and provide beneficial use areas as habitat for wildlife.  The increase in transportation efficiency and vessel traffic safety with these channel improvements are innumerable.

“Congressman Farenthold’s foresight in reaching out to the incoming administration and expressing the important magnitude our nation’s seaports share is very significant.  We thank the Congressman for his efforts, and for specifically including the Corpus Christi Ship Channel Improvement project in his letter to President-Elect Trump.    This project really is vital to the continuing prosperity of our region, and future prosperity for the nation,” said Charles W. Zahn, Jr., Chairman of the Port Corpus Christi Commission.

More than $100 million in goods value move through Port Corpus Christi daily.  This equates to a large number of vessels traversing our ship channels, and a big impact on the U.S. economy.  In 2015 over 103 million tons of cargo moved through the South Texas port, and more than 63 percent of this was outbound cargo.  The Corpus Christi Ship Channel Improvement project will provide the depth for bigger ships to carry more product with fewer trips.  For example, larger tankers will carry 50% more crude oil for export destinations worldwide, help US producers be more competitive, and help increase energy security. 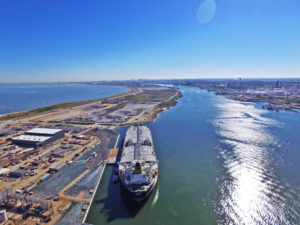 The 52 foot project will deepen the Corpus Christi Ship Channel for its entire length.