U.S. oil production is on a continued rise.  So much that analysts believe domestic demand will soon be outpaced by supply, and make way for more product for export markets. 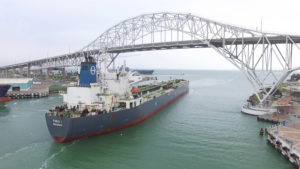 The THEO T sets sail from the Port of Corpus Christi with the first U.S. export of crude oil in nearly 40 years.

Congress lifted a ban on U.S. oil exports in December of 2015.  The first crude oil cargo to ship out left from Corpus Christi on the THEO T, leading the way in what has become a 200% increase in U.S. exports.  Q1 of 2017 marked the highest rate of export barrels on record at 1.1 million per day.