Corpus Christi, TX, USA – August 25th, 2018, will mark the one-year anniversary of Hurricane Harvey. The Category 4 storm caused widespread power outages and over $25 million in damages to Port of Corpus Christi property. When the Port re-opened after a six-day closure, it represented the largest operational refining center on the Texas Coast, playing a crucial role in bolstering fuel supply as the State recovered from the storm. 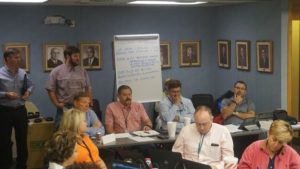 “This time last year, all eyes were on Texas as we faced a storm of unprecedented magnitude. I am proud of the characteristic resilience that Texans displayed to the world, and I am proud of the swift response from the men and women working at the Port of Corpus Christi during and after Hurricane Harvey. Our return to normal operations within six days is a testament to their efforts, as well as those of the first responders and government officials with whom we were coordinating. Last summer showed us, once again, how important community is to the Port of Corpus Christi – and how important our work is to our community,” said Sean Strawbridge, CEO of the Port of Corpus Christi.

Since reopening, the Port has had a banner year, breaking records for total tonnage and witnessing $50 billion in ongoing development projects in and around the Corpus Christi Ship Channel.

“Natural disasters remind us that there are forces beyond our control. But it is how we rebuild, recover and support one another that shows our mettle,” said Charles W. Zahn, Jr., Port of Corpus Christi Commission Chairman.

As the leading U.S. crude oil export port and a major economic engine of Texas and the nation, Port Corpus Christi is the 4th largest port in the United States in total tonnage. Strategically located on the western Gulf of Mexico with a 36-mile, 47-foot-deep (MLLW) channel, Port Corpus Christi is a major gateway to international and domestic maritime commerce. The Port has excellent railroad and highway network connectivity via three North American Class-1 railroads and two major interstate highways. With an outstanding staff overseen by its seven-member commission, Port Corpus Christi is “Moving America’s Energy.” http://www.portcorpuschristi.com/

Join the Energy Port of the Americas on Social Media

Click for pdf of Press Release – 1Yr Anniversary of Harvey