Corpus Christi, TX, USA – The Port of Corpus Christi Authority officially dedicated the opening of its new Port Executive Administration Building on Wednesday, November 10, 2021. The new 75,525-square-foot building sits at the entrance to the Inner Harbor and adjacent to the Congressman Solomon P. Ortiz International Center on Harbor Drive. The new state-of-the-art facility features modern technology and cooperative workspaces for both Port staff and its contractors and is nearly double the square footage of the prior headquarters.

With over $55 billion in economic development the Coastal Bend has experienced over the past decade, the Port of Corpus Christi had outgrown its previous headquarters.  The new Executive Administration Building was the product of a progressive design-build procurement process. Richter Architects of Corpus Christi were the design architects while the general contractor was a joint venture of Beecroft Construction of Corpus Christi and Bartlett Cocke of San Antonio.

“This new facility marks the end of one era for the Port of Corpus Christi as well as a new beginning for the Port as a globally recognized leader in the energy market,” said Charles W. Zahn, Jr., Chairman of the Port of Corpus Christi Commission. “The Port Executive Administration Building is designed to benefit our most important asset – our people – and will serve as a shining beacon for maritime commerce in the State of Texas as our region and nation move into a new time of prosperity.”

As the leading U.S. crude oil export gateway and a major economic engine for Texas and the nation, the Port Corpus Christi is the largest port in the United States in total revenue tonnage. Strategically located on the western Gulf of Mexico with a 36-mile, soon to be 54-foot (MLLW) deep channel, Port Corpus Christi is a major gateway to international and domestic maritime commerce. The Port has excellent railroad and highway network connectivity via three North American Class-1 railroads and two major interstate highways. With an outstanding staff overseen by its seven-member commission, Port Corpus Christi is “Moving America’s Energy.” www.portofcc.com 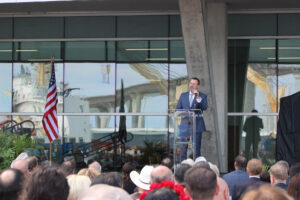 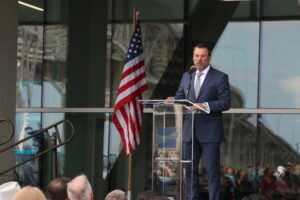 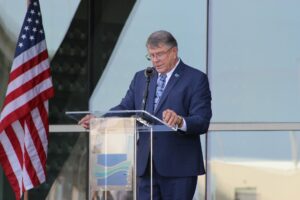 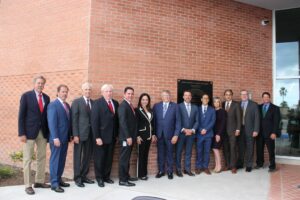